How many times have Escapees of Ritual Abuse been referred to as paranoid, psychotic, delusional and all other slanderous statements?

And for myself of trying for 50 years to speak out about Ritual Abuse and Satanic Ritual Abuse in both my Farthing and Harmer families and many churches I have come across, just to name a couple. I have had continual Registered Mail Stolen, Statutory Declarations taken out of Government Files, Mobile Phones hacked to the point that they have crashed and all memory wiped from them, continual interference with any Electronic Mail, Crashing, Infecting pc’s, the list goes on.

All I can say if I’m deluded, paranoid or so called mad, then why as a mad person not to be believed are all my communications a problem for these so called normal people? This is only some of the continual harassment.

And the persecution, again if I’m the mad person they claim I am, well then I should be of NO threat to them, as they keep saying it’s all so bizarre, don’t believe it.

Why then am I the person harassed? I never thought mad people could gain so much unwanted attention. Yet I have never attacked anyone in my life, yet they are so paranoid that they continually attack me.

Who really is paranoid here? And what are they trying to keep hidden? I have no secrets; I am only a witness to their evil!

The funniest thing about all of this is that they finally had me quiet for a year or so due to chronic illness, but were they satisfied that I was finally quiet? No they still continued the Harassment and Persecution and so of course they have managed just to pick off scabs, let the wounds bleed again and ultimately cause me to speak out, now about everything.

Please find at the end, the evidence of the guaranteed Registered Mail to the courageous Australian whistle blower Detective Inspector Peter Fox.

We had contacted the Police and they said they were sending a Detective out to speak with us but telephoned soon after and cancelled the appointment. Why?

We can only assume that they checked our names and found that we have sent information and evidence about widespread Ritual Abuse networks to ALL Authorities in Australia but none of them want to respond because the evidence and information that I have is extensive and they obviously do not want to address it. As Dr Reina Michaelson also found out and was also Persecuted.

This means that this Mail was intercepted and stolen. As it was sent to a Police Station it’s not imaginable that anyone other than Police Staff could have stopped this letter from reaching Detective Inspector Peter Fox.

Detective Inspector Peter Fox has also been Persecuted and apparently had multiple threats since bravely exposing cover ups by Police in conjunction with Catholic Church Officials.

This now known as the Catholic Mafia in Australia.

A large quantity of evidence was also sent the Victorian State Premier; Ted Bailleau and his Office thoroughly examined the information and evidence and diligently sent it to the appropriate Minister for Human Services; Mary Wooldridge and ultimately they sent ALL of the evidence to the Victorian Police on behalf of myself and my brother Danny.

The Victorian Police have NEVER responded.

I believe I have answered the question about their justifiable paranoia! 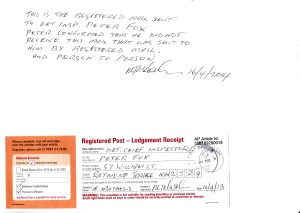 3 Responses to Harassment and Persecution