The Murder Of My Sister Janet Farthing

The Above Birth Certificate is of my older sister Janet Thelma Farthing, she was the first Registered Birth to our biological parents Leonard Roy and Thelma Jean Farthing (nee Harmer). There were also Unregistered Births to this man and woman.

My sister’s short life was filled with horrific Physical, Emotional, Sexual and Satanic Ritual Abuses. All children who were born to these so-called parents, whether Registered or Unregistered Births including myself endured much torture, trauma, bestiality, sold as sex slaves from infancy, drugging’s, neglect for all basic human needs which included being dehydrated, untreated illnesses (basic healthcare) and malnourishment.

Please examine the copy of my sister’s Death Certificate below.

The day my sister Janet was murdered started with her having horrendous pain at approx 7am in the morning of Monday 23rd June 1975, the day after our family’s religious observation of Winter Solstice. Please refer all previous posts about my Satanic family and their involvement with the Global Organised Satanic Occult Religion.

When this day of murder started for her an ambulance should have been called immediately at 7am, but this did not happen until late in the afternoon, instead she was told to lie down first in our brother’s bedroom, then she was moved by our grandmother and mother into the bedroom Janet and I shared with our mother. Janet was made to lie down on the double bed that she had to sleep in with our mother and most nights she cried with the sexual abuse done to her by our mother in that bed. I had a single bed in the same bedroom.

Late in the afternoon our mother told me to call 000 (the emergency phone number) and ask for an ambulance to be sent to the house (37 Rosamond Road, North Footscray). I was surprised that our mother told me to call for an ambulance as I was always told that I was not allowed to use the telephone. Altogether I called 3 times for an ambulance, which the depot was less than a 5-minute drive from the house. Between using the telephone and going back into the bedroom to see what was wrong with my sister, my calls to 000 became more urgent and I could not understand why the ambulance had not arrived, as even to walk to their depot was less than a 15-minute walk from the ‘house from hell’.

Each time I went back into the bedroom I was confronted with our mother sitting astride over my sister who was lying on her back, with our mother having her hands together as a clamped fist and pounding on my sister’s chest. All I could hear both in the bedroom and outside in the dining room where the telephone was, was the pounding our mother kept doing to my sister’s chest. The pounding she got for well over an hour was loud and I heard cracking noises and my sister screaming.

Finally, when the ambulance did arrive our mother left the bedroom and answered the front door to 2 paramedics who walked in, one paramedic went into the dining room with his hands in his pockets and just stood looking at me and the other casually walked into the bedroom and he was in there for far less than 5 minutes and then he wandered slowly out and said; “It’s too late she’s dead”.

The total time it took for the ambulance to arrive to the house was 55 minutes, which was less than a 5 minute drive from the depot!

Here I need to add that my sister was 7 ½ months pregnant, which was common knowledge as she was showing with her advanced pregnancy, she also had lay-bys of baby clothing and furniture at the newly built High Point West Shopping Centre, Target Store, which I went with her when she made regular payments off her lay-bys each fortnight. She also made a point of telling everyone that she was keeping this baby, as she had previously in her teenage years adopted her newborn baby girl out through the then Church of England and had given birth to the baby girl at the Royal Women’s Hospital, Melbourne.

Please note on Janet’s Death Certificate, there is NO mention of her advanced pregnancy.

Her unborn baby is NOT notarised on her Death Certificate at all.

Under the Coroners Act; Victoria: When 2 or more children born of the same parents die unexpectedly then an Inquest must be held, this did NOT happen, please refer to my post of the death of my brother Brian Farthing who was the 1st Registered child born of Leonard and Thelma Farthing to die unexpectedly. Here

When my sister was murdered by our mother, no Police came to the house, no-one was questioned about the death of my 22-year-old sister, a young woman in the prime of her life and expecting to bring another life into the world.

I was 13 years old at the time and I was not questioned from any Authorities, Child Protection Services etc. and yet only 5 years before this murder of my sister, our brother; Daniel (Danny) was taken from our family and placed into Kew Cottages, at that time there were still 3 other children left with this family, being my sister Janet, brother Anthony (Tony) and myself. See here

Please also note the Coroner at Melbourne, Victoria on Janet’s Death Certificate, named; Mr. H. W. Pascoe, ordered cremation of the body without inquest? Please find link at the bottom of this post to Mr. H. W. Pascoe and his inquest into the deaths of 35 men from the building of Westgate Bridge in 1970 and the deaths caused by corruption (industrial blackmail). Yet he denied an inquest into the death of my sister only 5 years later, WHY?

‘The operations of the Occult within the Public Service’ even made sure that not only was my sister’s death covered up, but what happened to Janet’s baby in her womb?

Janet’s body was burnt to a crisp in under 48 hours from the time of her murder, the cremation of her body of course was also to cover up any further or future investigations  by burning her to ashes. Then there is nothing left to do forensics on!

Did Janet’s baby also get burnt to ashes in her womb? If so, we have a second murder!

Finally, to add the final insult with my sister’s murder, her burnt ashes were placed in Altona Cemetery (Crematorium) in the Occult section with our maternal grandparents who owned the ‘house from hell’ George and Flora Harmer. Map Below. 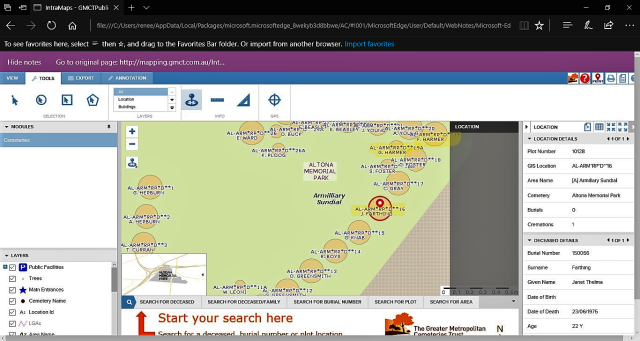 Many years later in 2012 when I was living in Taree, Mid North Coast of New South Wales which is another State in Australia, I went to visit a psychiatrist at the Mayo Private Hospital, named; Dr Karl Koller, as part of my pain management plan. When I seen this so-called specialist, I was shocked because when I walked into his office he immediately started raving and ranting at me saying my sister was not murdered and his neighbours are not Satanists. I had never met this man before, I had only dealt with the pain management doctor and I had not told him anything about my sister’s murder. I could only assume this deranged specialist was an Occultist by his own behaviour as he was so insistent on screaming at me that he had spittle flying from his mouth and he kept wiping the sweat from his face with his hanky.  He sounded like a complete lunatic. I also perceived him to be dangerous, so I kept my mouth shut until he wore himself out with his frantic rambling. When he had finished his ranting and raving I simply told him; “I was there when my sister was murdered and I did not see you there on that day”.

After I left his office I was followed by a man in a white van and I was feeling traumatised by what had just happened and I needed to ascertain for sure I was being followed. So, I drove my car into 2 different shopping centres, the second shopping centre I even did some grocery shopping and lastly a petrol station on my way home and each time I drove back on the road the same white van followed me back to where I was temporarily living. My Carer; Michael Mathews had been ill and normally he would have come with me at the time and when I arrived back to where we were staying, I immediately told Michael, I was being followed. Michael walked straight towards the white van and the driver quickly got back into the van and took off.

In conclusion, this is the Global Organised Satanic Occult working in every State and Territory in Australia.

1 Response to The Murder Of My Sister Janet Farthing