Sacrifice and Communion in Satanic Coven 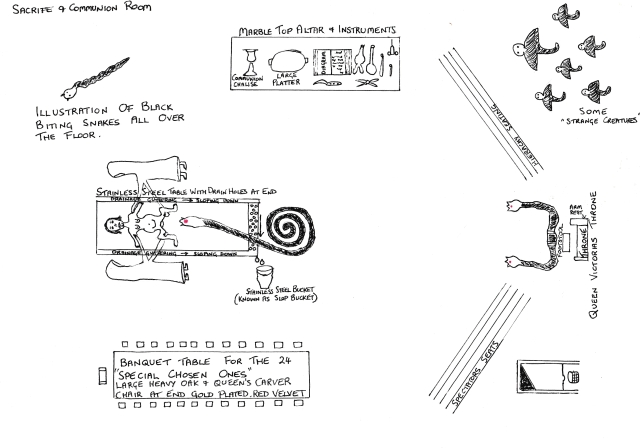 MY DRAWING IS A PICTURE SHOWING A FULL SACRIFICE AND COMMUNION IN A SATANIC OCCULT COVEN. PLEASE CONTINUE TO READ WHAT THIS PICTUE IS ABOUT THAT I DREW 7 YEARS AGO.

This picture is of one of the main seasons of the year’s occult sacrifice. The main seasons being; Summer/Winter Solstice and Spring/Autumn Equinox’s.

This is one of the ‘Breeder’s’ chosen specifically for giving birth to a baby at 32/3 weeks of pregnancy. These ‘Breeders’ are selected from puberty specifically to grow babies for sacrifice. They are teenage girls who don’t show their pregnancies but most importantly they need to be able to give birth easily and continue this role for as long as deemed suitable.

They will give birth in the full public on a stainless-steel table which slopes down towards the ‘queens’ throne. At the sides of the table are gutters and at the end are drain holes to collect blood. The stainless-steel bucket known as; ‘slop bucket’ is only to put the afterbirth into for other pregnant ‘Breeders’ to eat and share with from the above ‘Breeder’.

The serpent waiting at the end of this table is there to slither into the woman’s vagina to help stop the flow of blood that naturally occurs after giving birth, to make it appear as only a heavy monthly period (menstrual cycle). Before these ‘Breeders’ start their role in this status of breeding this serpent will have already have been into the girls/woman’s vagina to prepare for pregnancy.

After the baby is born the illustration of the marble top altar will be used to dissect the baby. What I have not drawn into the marble altar is the same drainage system to collect the blood from the baby into a large gold 2 handled urn. This is the blood that is then poured into a gold chalice (goblet) for drinking.

The baby’s blood must remain pure from the mother’s blood and afterbirth.

The stainless-steel birthing table gets hosed down and covered with a white silk cloth, and after the baby has been dissected into pieces and the flesh sliced it is then put onto a gold platter and the chalice of blood will both be put upon the covered birthing table.
The ‘queen’ and the full 24 ‘special chosen ones’ will move to the banquet table waiting to be served this sacrifice. At these 4 seasons of the year the full 24 hierarchy must be present. Any other sacrifices during other celebratory times of the year only half (12) of the hierarchy need to present.

The spectators wait until this sacrifice is consumed and they all live in the hope that one day they will become a ‘special chosen one’. After this full ancient occult communion then the festivities will begin throughout the night, which will include trials of any child/adult accused of treason to be beheaded with the guillotine, or tortured, crucified and even killed and brought back to life etc. Therefore, the occult always has their own doctors present.

For satanic ritual abuse victims, please do not feel condemned if you have been subjected to this horror. For it is truly horrendous, the smells the baby screaming, the cheering etc.

I have only drawn one picture and explained this sacrifice and communion, throughout the year there are many other variations of sacrificing babies and children. As there are also many other ‘Breeders’ for different purposes.

This above ancient communion is not to be confused with live stage shows, snuff, torturous murders, child killings etc. These are preludes to a full communion.
This drawing and explanation is purely the organised global ancient occult’s religious observations and full communion. Explained from the ‘black bible’ and from witnessing this event many times, and being forced to partake in this filthy communion.

Finally, the organised global ancient occult will use all ‘false’ gods for rituals, however this sacrifice and communion is solely dedicated to satan the devil for the longevity of life for these soulless slaves to evil. It is their ‘fountain of youth’ in which they are promised a long life here on earth.
I only use reference names of satan from the Holy Bible as it/he/she is a cast out being and all previous names, titles are NO longer relevant, nor any other names, titles for the fallen angels and the Nephilim.

“There is nothing covered up, except for the express purpose to be uncovered”. Christ Jesus. Holy Bible.

2 Responses to Sacrifice and Communion in Satanic Coven